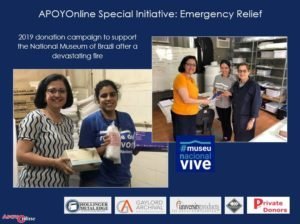 After the 2017 hurricane season that battered the Caribbean, APOYOnline contacted preservation professionals in Cuba to survey their immediate needs to salvage their collections. They expressed the urgent need for preservation materials and equipment to preserve the affected collections in libraries, archives and museums. In October 2017, APOYOnline members visited Cuba and distributed supplies generously donated by University Products, Gaylord Archival, and Hollinger Metal Edge, in addition to private donors, to five major institutions such as the National Archives, National Library Jose Marti, Art Institute (ISA), National Museum of Fine Arts, and the Ernest Hemingway Museum.

Despite the success of the 2017 campaign, the continued need for supplies to support recover from hurricanes Irma, Maria, and Jose was apparent, so APOYOnline initiated a second supply donation campaign in anticipation of a second trip to Havana in March 2018.

We were humbled by such a generous outpouring of support for our Cuban colleagues and were able to transport a range of supplies and tools, including 60 salvage wheels in Spanish, during our March 2018 trip to Havana, which also included a four-day photographic preservation workshop and visits to Cuban cultural institutions.

Thank you very much for your support of cultural heritage preservation in the Americas!

You can still support the efforts of APOYOnline by visiting www.apoyonline.org

and clicking the “donate” button, by our Facebook page at www.facebook.com/apoyonline , or just by clicking on this link here.